Okay, so today, I’m doing a short post on ‘Friends.’ Ah, Friends. The TV sitcom that we are all still obsessed with to this day. If you haven’t watched Friends, then why are you even here? Go watch it now! Anyway, what I am about to reveal to you all now will probably make you gasp, so brace yourselves…

I only finished watching Friends for the first time today! I know, I know, how did I not watch it before?! I knew about it all along but I thought it’d be really bad because of how old it was, and maybe it’d be too ‘overrated.’ But damn, am I glad that my friend persuaded me to watch this because my life is now complete! This morning I was sobbing my eyes out whilst watching the last episode, and frankly, I don’t think I’ve ever cried so much over a TV show than I have for this one. Who wouldn’t love to live in huge apartments in New York with your best friends, with as much freedom as you like sprinkled on top? For the rest of the day after finishing the series, I’ve been sitting in front of the TV for an hour desperately trying to find another series to binge watch, but nothing seems good enough, and now I’m really depressed… Any suggestions for good shows? Please comment down below, I’m begging you 🙏. 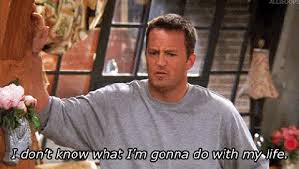 Anyhoo, gosh. I just wish that Friends could stretch on forever, because that’s what it felt like whilst watching it on Netflix for the first time. After finishing one episode, there would always be the next one and I could just happily click on it and spend hours watching a bunch of them in one day, but when I finished the last episode and there wasn’t another one, I just felt like collapsing on the spot. That meant no more coffee, no more stupid Chandler jokes, no more of Phoebe’s craziness, no more of Rachel’s stubbornness, no more of Ross’ hilarious expressions and dinosaurs, no more of Joey’s dumbness, and no more of Monica’s organization and obsession with babies. I mean, I get that I can just watch it again whenever I want to, but still.

Hey, do you guys remember ‘The One Where Everybody Finds Out?’ Season 5 Episode 14? Here’s a little GIF to brighten up your day and refresh your memory (I may slightly overuse gifs and memes in my posts. Bear with me.):

This one was probably my favourite one of all of them, and that’s saying something because it’s. So. Hard. To. Pick!

So as you can see, the rest of my day will be spent looking up Friends memes and mooching about the house for a new series, then realization dawning on me that no show can ever be as iconic and good as Friends and then listening to depressing Spotify playlists. You know, the usual. I don’t actually know if that sentence made any sense, but at this point I feel like Joey anyway. What about you? What are y’all gonna be doing? Something better than me, hopefully. This may have been a slightly off-putting post, and I apologize sincerely for that, but I still feel like utter crap and had to get this out somewhere because… I say more dumb things before 9am than most people say all day. See the reference? *Wink wink.* For now though, have a great day, readers, and wish me luck on my Sad Sunday! (The worst thing is, Sundays are depressing enough for me already, never mind adding a weird Friends withdrawal to it.)

Have an amazing day, and Stay UniquelyYou! ♥